A narrative on Council Grove

Prior to working on this essay, review the Week 1 lectures on Writing about Place, Writing a Narrative Essay, and The Writing Process. The lectures provide necessary information that you will need to complete this essay.

Write a Narrative Essay about your connection to a place. The essay should be at least 500–750 words in length. Do your best to use APA formatting, double spacing, 12-point typeface, and a title page (see the APA Formatting lecture in Week 1).

For this writing assignment, you are creating a narrative that connects your own experiences to a particular place that has meaning to you.

Narrative essays share a familiar structure. They have titles, introductions, body paragraphs, and conclusions, but they also afford the writer a great deal of freedom and creativity to share your story in a way that is true to your experiences. Have some fun with this essay, but do keep in mind that you are in a college class, so your story should be appropriate for the context and the audience.

By the due date, post your essay in the Discussion Area below by attaching your draft into the response section. Critique two of your peers’ rough drafts, using these guidelines:

This handout will explain the details of formatting your essay using APA style. You may create your essay with this APA-formatted template.

Council Grove is one of the 8 Wonders of Kansas History because it is a Santa Fe Trail National Historic Landmark town and is the site of a 1825 treaty that led to an intersection of cultures between Kaw Native Americans and Euro-Americans.

From 1821-1866, the Santa Fe Trail was known as America’s first international superhighway of trade and commerce. Spanning 900 miles between Missouri and Mexico the trail brought together a cultural mosaic of individuals. In 1860 Seth Hays recorded 5,405 Mexican and Euro-American traders, 1,532 wagons and 17,282 mules, oxen and horses passed through Council Grove.

A self-guided tour brochure, available in most Council Grove shops, features 24 historic sites around town. Visitors will learn about an intersection of cultures between the Kanza (Kaw) tribe and Euro-Americans during the trail days through the tour or online. Kansas is named for the Kanza or Kaw tribe.

SYMBOLS OF THE TWO CULTURES

To the west of the U.S. 56 and K-177 intersection is the Guardian of the Grove Kaw statue. To the east is the Madonna of the Trail statue situated on one of the most important rendezvous points on the Santa Fe Trail. These two statues symbolize both cultural cooperation and collision.

THE TREATY THAT LED TO THE NAME OF COUNCIL GROVE

On August 10, 1825, three U.S. Commissioners met with representatives of the Osage tribe under a large oak tree. A treaty was signed that gave Americans and Mexicans free passage along the Santa Fe Trail in exchange for $800. The Council Oak was part of a mile wide grove of trees that provided shelter and wood for wagon repairs on the Santa Fe Trail, thus the name Council Grove was carved into a large Bur Oak. A few days later a similar treaty was signed by the Kaw tribe.

Before the Council Oak blew down during a windstorm in 1958, the oak was approximately 70 feet high and measured 16 feet around. The remains can now be seen at 3rd and Main. Council Grove is a Tree City USA, a guide to the historic trees is available. 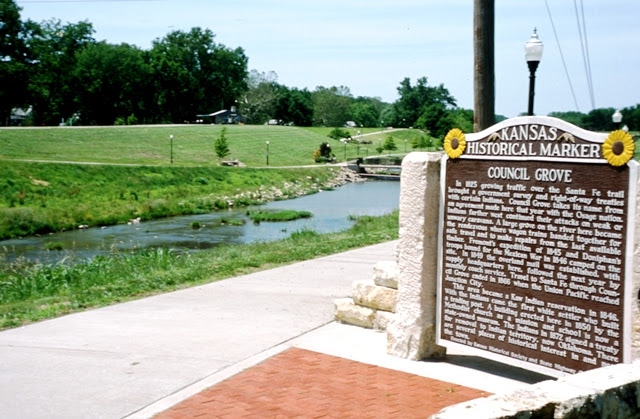 Completed by volunteers in 1998, the Neosho Riverwalk gives you a birdseye view of the historic Neosho River crossing. One of the most documented crossings on the Santa Fe Trail, caravans could cross this site in inclement weather because the river bed consisted of bedrock, not mud, as in other crossings along the Trail.

The lighted and landscaped ADA accessible Neosho Riverwalk connects the Madonna of the Trail, the Guardian of the Grove, and the Kaw Mission State Historic Site.

In total, there are more than 24 historic sites you can explore on your own, many with signage by the National Park Service.

Nothing to add. You can google Council Grove ,KS. Council Grove is where I live, it is nestled at the foot hills of the flint hills, the population is about 2,000 . There is one traffic light, one grocery store, one car dealer ship, lots of antique shops . The Neosho River runs through Council Grove, next to the river there is several miles of walking paths, the Indians used to camp along side this river. we have several historic restaurants that serve food that was eaten in 1800’s. You can still see the wagon wheel ruts from the Santa-Fe trail that ran through Council grove, KS

A narrative on Council Grove

Different regions in the United States bear significance to individuals based on their association with the various places. While some people may regard areas away from their homes as their ideal locations and which they hold with high regard, others would settle for their home towns, largely due to their perception of the region. Notably, some towns in the country developed primarily from trade and went ahead to become significant players in the American economic landscape, while others achieved success simply because of their tranquility and general appeal to a broad range of populations. Just as much as the regions may have developed……………